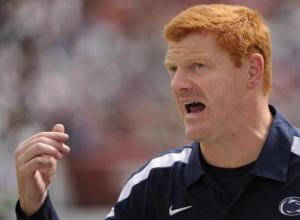 11/12/2011 UPDATE BELOW. This post is not designed to provide coverage on the horrifying and troubling events that have been revealed at Penn State at the hand of former coach, Jerry Sandusky.  Click here to get coverage from the New York Times.  Instead, this post is presenting a very simple question:  How can it be that the Board of Trustees fired University President Graham Spanier and legendary head football coach, Joe Paterno, but the current wide receiver’s coach and team recruiting coordinator, Mike McQueary, still has his job?

According to the Grand Jury Presentment against Sandusky, McQueary was the then graduate assistant that went to Penn State’s locker room facilities on a night in 2002 when he heard, and then actually saw, Jerry Sandusky raping a ten-year-old boy in the showers. There’s so much to say, but let’s look at just two aspects:

1.  Mike McQueary is a former Penn State Quarterback, he was 28-years-old when this event occurred, and looks like he runs about 6’3″ and 230 lbs.  So, why McQueary didn’t stomp the 58-year-old naked and distracted Jerry Sandusky into the shower room tile is a mystery.

2.  Next, why didn’t McQueary call the cops?  There is no legal obligation to get involved in a crime in progress, but one would like to think that a call to 911 would be made as a civic responsibility at the least.  People call 911 when they see a drunk driver and even when McDonald’s runs out of Chicken McNuggets.  So why don’t you call the cops when you see the rape of a child in progress?

Instead, McQueary tells his dad what he saw and then he tells Joe Pa what he saw.  Joe Pa then tells Athletic Director, Tim Curley; but the telephone game apparently washes out some details.  Paterno or Curley could have, and should have, called the cops; but neither of them was an eyewitness like McQueary.

University President Graham Spanier and Joe Paterno were fired last night.  McQueary still has a job.  Today.  Should McQueary still have a job this Saturday by the time the Nittany Lions’ game gets underway?  We think not, how about you?

UPDATE: McQueary has been put on leave and will not be at the game today when Penn State hosts Nebraska in Happy Valley.

3 thoughts on “Penn State Commentary: What about McQueary?”