They don't call it the burden of proof for nothing...

Back on January 31, 2011, I wrote about a group of foreclosure lawyers who filed a complaint against three Franklin County Common Pleas Judges (John Bender, Kimberly Cocroft, and Guy Reece) over an Order they signed requiring foreclosure lawyers to sign a certification on behalf of their clients – the foreclosing bank.

In a nutshell, the certification requires the foreclosing lawyer to verify certain facts, including that the foreclosing bank is the proper party and that it holds the original note and mortgage before it can obtain a judgment to take away a home.

The Franklin County Prosecutor’s Office (the lawyer for all County employees in their official capacity) filed a Motion to dismiss the Complaint and the Ohio Supreme Court granted that motion yesterday without any findings of fact or conclusions of law.  The Court’s decision was unanimous among the seven Ohio Supreme Court Justices:

State attorneys general across the nation, including then-Ohio Attorney General Richard Cordray, announced in October that they were investigating fraudulent foreclosure filings. Some law firms and major lenders were using so-called “robo-signers” to complete affidavits on foreclosures without reading the documents or verifying ownership of the mortgage notes.

In late November, the three Franklin County judges began telling all lawyers who file residential foreclosure cases in their courtrooms that they must “personally certify the authenticity and accuracy of all documents” in support of the filings. If a lawyer doesn’t, the judge will not grant a motion for default or summary judgment, but will instead schedule the case for trial.

Setting a foreclosure for trial can delay the case for a year or more. However, in its motion to dismiss the lawyers’ complaint, the prosecutor’s office argued that a trial date provides a “remedy” for those who object to verifying their clients’ documents.

“The fact that the trial will delay matters does not change the fact that it is an adequate remedy,” wrote Assistant Prosecutor Patrick Piccininni. “Any issues of authentication of documents and proof can be settled at that stage.”

Personally, I think the Judges are fully within their discretion to order foreclosure attorneys to verify their cases.  Most foreclosures are pushed through the courts unopposed and as fast as possible.  Mistakes are made and big banks take advantage of the volume of cases and overload on the judges to skirt the rules to their benefit.  Thanks Judges, for watching out for the homeowners in these economic times.

I read John Futty‘s article in The Dispatch this morning about the Order of three Franklin County judges requiring lawyers to verify that all of the documents in residential foreclosure actions are valid.  This comes in response to a national outcry over fraudulent foreclosure filings.  Futty writes: “Six of the lawyers affected by the order are fighting back. They have asked the Ohio Supreme Court to prohibit the judges from requiring them to sign “certifications” on behalf of their clients.”

Common Pleas Judges John F. Bender, Kimberly Cocroft and Guy Reece have issued this Order and are the subject of the suit.  Apparently, Judges Laurel Beatty and David Fais were ready to issue the same Order, but are waiting to see the outcome of the suit.

Cleveland attorney John C. Greiner is representing the six lawyers that filed the lawsuit that, according to Futty’s article, claims the Order will require them to divulge confidential attorney-client privileged information.

What I find interesting is that a Cleveland lawyer, Greiner, is bringing this suit when his home County of Cuyahoga has required foreclosing attorneys to sign a “Certificate of Readiness” since at least 2004.

And, really, what’s the problem with the Certificate of Readiness?  I’m not sure what the Franklin County Judges are ordering, but I imagine it is something similar to Cuyahoga County’s Certificate of Readiness.  If it is, no privileged information is sought and, instead, it is more like having to turn in your High School algebra homework where you have to “show you work” – proving that you applied the correct equations to reach your answer.

If you haven’t gathered this already, I have not read the Franklin County Judge’s Order.  This post is simply a reacton to John Futty’s article from the perspective of a lawyer who knows this system well.

At the end of the day, there are two lessons to be learned.  (1)  Lawyers should check their work and the current economic climate and “factory produced foreclosures” give credence to the Order and, (2) Administrative Judge Charles C. Schneider is right that the Order is redundant because Civil Rule 11 already requires lawyers to check their work.  The fact that the two lessons oppose one another begs the question: if all foreclosure attorneys are checking their work, then why does Cuyahoga County have the Certificate of Readiness and why are Franklin County Judges creating their own Orders on this topic?

You can read John Futty’s article, here, and you can consider whether the foreclosure process is spinning out of control.

If you’ve never visited the Failblog, I would highly suggest having a look around for some comic relief.  I came across this gem and it gave me that inner laughter and brain stimulation that keeps a good “funny” in your head for days.

What a ridiculous stamp for an envelope to have!  The craziest thing may be that someone created this stamp in a shop and sold it.  Now, I could wax philosophical for a while about alternate perceptions of reality: can you ever truly know if you did not receive something?  Or, how do you notify someone of an event that never took place?  But let’s take a look at the legal ramifications this stamp could have since, well, that’s the theme of this blog.

There’s a certain legal theory known as the Mailbox Rule.  In general, the Mailbox Rule allows for the formation of a valid contract at a certain moment in time when one party does not actually know the contract has been formed.  A practical example is a contract, say, to buy 1,500 lbs. of watermelons from a local supplier.  You picked up an order form at his grove-stand last week and filled it out at home to buy 1,500 lbs. of watermelons for a certain price.  You sign it, and drop it into the mailbox that gets picked up at 7:00 AM the next morning.  Well, you are in contract right now – the very moment you dropped the letter into the box.  The supplier does not know you signed it yet, but the Mailbox Rule deems the agreement valid from the moment you circulated the agreement into the mail.

The Mailbox Rule is a little dated by modern standards.  In the 1980’s we were getting used to faxing documents, which now is becoming a dated way to communciate.  Now, I can scan the contract and email it to the watermelon supplier and he will have actual knowledge of the agreement within minutes – not days.

So, what’s with this letter?  Is the sender trying to add some teeth to the Mailbox Rule in an, arguably, idiotic way?  “Yes, your honor, not only did I mail the contract to Jeff, but it said right on the envelope to call me if he did not receive it.  He never called me so….”

Can you think of a legitimate use for this stamp?  I would love to hear one.  But if you don’t think of one, please notify me immediately.

Conan O’Brien gave his first interview since leaving NBC last night on 60 Minutes.  You can watch the interview and read the transcript on Deadline. I didn’t catch the interview last night, but listened to the CD101 morning show jocks talking about it on my way to the office.  They were debating Conan’s response to Steve Kroft’s question of whether Leno acted honorably in retaking The Tonight Show throne from Conan.  Conan’s response was:

I don’t think I can answer that. I don’t think– I can just tell you maybe how I would have handled it. And I would do it differently.

According to the radio jocks (and pretty much everyone I know), Jay was not honorable in the handling of the Tonight Show.  My ears perked up when one of the jocks wondered if Conan did not want to answer or whether, legally, he could not answer the question.

The Answer:  He probably cannot for legal reasons.

Unless you’ve had your head buried in the sand or are one of those esoteric academics that refuses to own a television, you know that Conan was paid handsomely to leave The Tonight Show without a fight.  $32 million is the reported number.  That means there’s a contract, people.  This author would venture to guess that the contract has a hefty non-disparagement clause.

Yes, you can agree not to say nasty things about someone.  This elevated and more civilized version of playground justice boils down to simple language in a contract that says “Conan agrees not to say bad things about Jay Leno.”  The contract probably says that Conan is permitted to say he disagrees with the result or that it’s not what he wanted, but he can’t bad-mouth Jay.

So, when Conan said, “I don’t think I can answer that,” Conan is saying that it’s not worth giving up $32 million for the sweet revenge of calling Jay an unscrupulous, devious backstabber, like he probably wants to say.

My editorial is that Conan probably had two reasons for his answer, (1)  his contractual obligations, and (2) Conan has always displayed the qualities of a complete class-act.  So, while his contract is important to him and his future, his integrity probably keeps his lips sealed as well.  We wish you the best, Mr. O’Brien. 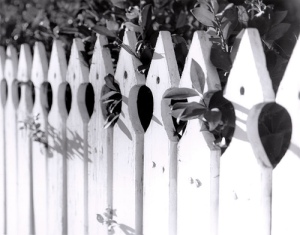 Hey, Huck, how about you paint this fence?

Performance: The fence gets painted.

Now what happens if you pay the $50.00 and the painter runs off with it?  You can sue the painter for breaching the contract.  Have a look at my post on small claims court practice for information on how to do this.

Let’s say you sue and you win.  What is your remedy?  Can you get the $50.00 back?  Absolutely.  Can you force the painter to paint the fence (a remedy known as specific performance)?  No.  Ohio law is pretty clear that specific performance for a contract for personal services is not an available remedy.  The reasoning behind this is the “mischief” that could result by forcing a party to perform a service after breaching a contract. END_OF_DOCUMENT_TOKEN_TO_BE_REPLACED